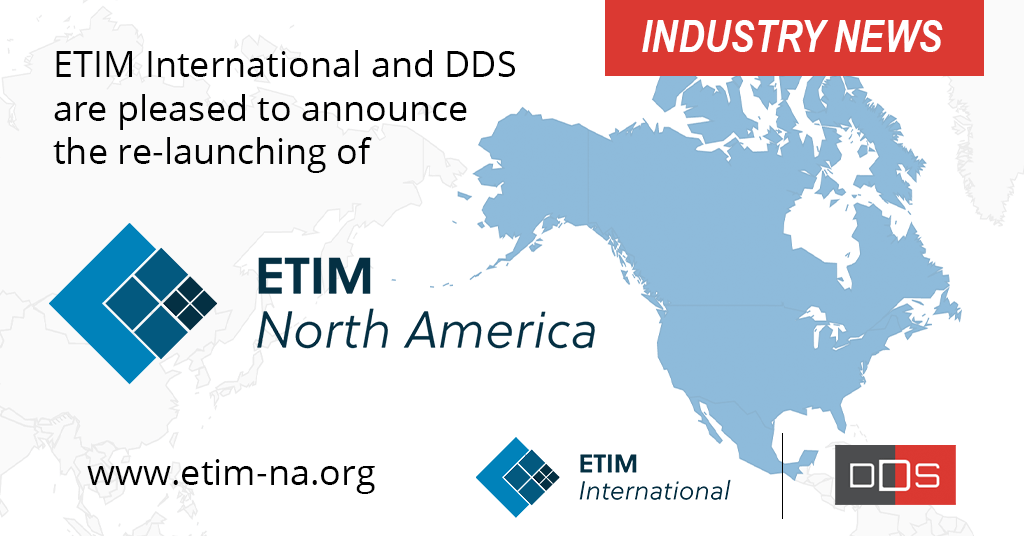 (SALT LAKE CITY and TORONTO) – Feb. 18, 2020 – As founding member of a new ETIM North America association, DDS (Distributor Data Solutions), a technology and product content solution provider to the wholesale distribution industry, has announced the re-launch of ETIM North America as a dedicated non-profit organization responsible for maintaining and promoting the adoption of ETIM standards in the U.S., Canada and Mexico in line with the worldwide data standards initiative.

ETIM is the international data model for the standardization and classification of technical product data and is used by global manufacturers, distributors and end-users doing business in dozens of countries. Developed in Europe, ETIM was established to meet growing demands for a clear, discerning information structure for available technical products. Initially developed for the electro-technical sector, ETIM has steadily expanded its activities to different industries and countries worldwide, currently offering the ETIM classification model in 17 languages.

More than 20 national and regional ETIM organizations (federations) support their communities’ members and translate the model into their country’s language. ETIM North America was first introduced in 2015, though adoption and use of ETIM standards in North America has lagged due to a limited focus and sporadic efforts to adopt UNSPNC-based standards. However, as global business dynamics and e-commerce initiatives have accelerated, ETIM is becoming the global standard.

As specialists in e-commerce product data, DDS has been instrumental in establishing the new ETIM North America association with the goal of spearheading an active community empowered by a diverse manufacturer, distributor, manufacturer representation and technology provider membership. Membership is open to all companies and associations in ETIM’s focused industries.

“As the founding member of the new ETIM North America, DDS will pursue more aggressive promotion of and adherence to the ETIM model and standards at a time when they are becoming essential in the global market,” says DDS president Matt Christensen, also the new president of ETIM North America. “We have some catching up to do, but this initiative is absolutely relevant and beneficial to the U.S., Canada and Mexico. Within North America the initial focus has been the electrical industry and we’re working to finalize those standards and then moving into complementary industries.”

“We are very pleased to see the new ETIM North America association in position to steer the further development and implementation of our worldwide product classification standard with new energy and dedication,” says Jan Janse, president of ETIM International (www.etim-international.com), the Brussels-based head of the ETIM community. “We value and support the DDS initiative and commitment, especially considering how important the North American market is for ETIM.”

With a large number of their manufacturing and distribution customers serving international clients, and their affiliation with various international trade groups, DDS is active and growing on a global scale. Considering the collaborative environment of ETIM, and with DDS now the leading provider of e-commerce product content to the U.S. electrical and related construction and industrial verticals—similar to ETIM’s core focus—there is a strong alignment of goals.

“We’re working closely with many major global manufacturers and distributors to help streamline the exchange and management of product data,” adds Christensen. “Our relationships and our role in the industry, along with our focus on technology-driven solutions, give us a solid strategy for pushing adoption and demonstrating value to both suppliers and wholesalers.”

When asked why companies should join ETIM North America, Christensen says the “short answer” is that this collaboration “can reduce costs in the supply chain and bring more value and functionality to users of this information—which includes all of us. The ETIM model is already proving a stable, yet flexible standard that is future-oriented.”

Based in Salt Lake City, ETIM North America is a non-profit regional organization responsible for supporting the implementation and adoption of the ETIM Technical Information Model (ETIM) in the North American wholesale electrical industry and related C&I verticals. www.etim-na.org