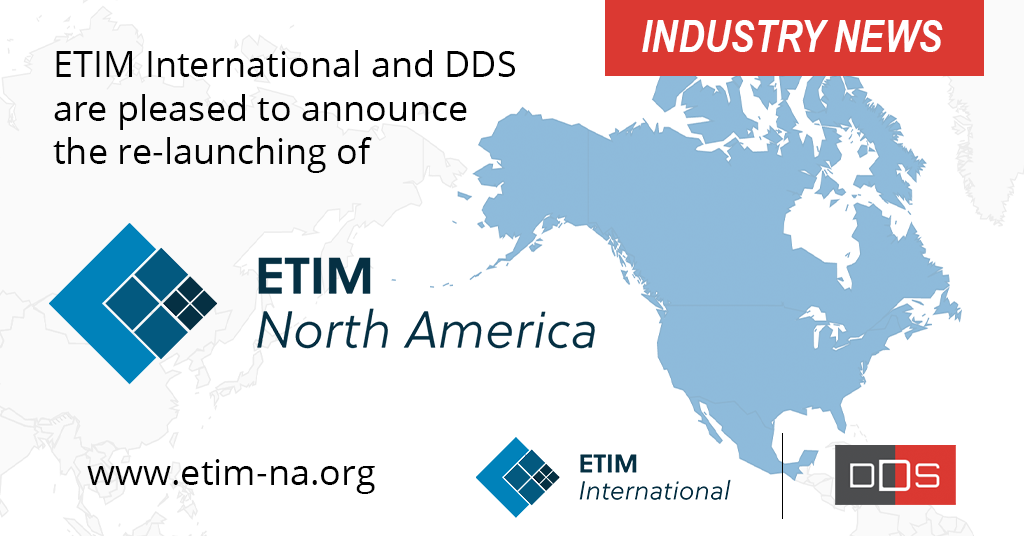 In just 18 months, ETIM NA, the North American chapter of ETIM International, has seen unprecedented success in promoting the adoption and development of the ETIM global classification model in the U.S., Mexico and Canada. As its founding member, DDS has been instrumental in ETIM NA’s growth in North America—a region that, while previously slow to adopt the model, is critical to the global economy.

Since founding the new ETIM North America association in early 2020, DDS—a leading provider of e-commerce product content solutions to the wholesale industry—has overseen ETIM NA’s remarkable growth in both recruiting member companies and actual development of the classification model based on the region’s needs.

In just a year and a half, ETIM NA has attracted nearly 30 like-minded manufacturers, distributors, technology companies and associations who see the value in supporting an industry-developed data standard. As Direct Members, these companies are actively participating in ETIM NA-led committee activities to build out the classification model according to the needs of the North American electrical market and related verticals.

ETIM NA member companies include some of the world’s largest manufacturers, like Siemens, Schneider Electric, ABB, Eaton, Atkore and Legrand, as well as prominent North American distributors such as Sonepar, Graybar, Summit and McNaughton-McKay. Other members include product content and technology providers like DDS, IDEA, Trimble and BlueVolt, as well as key organizations like IMARK Group, EFC and NEMRA.

The actual classification work is done by Product Expert (PE) Groups, which include product specialists from member companies. The PE Groups are tasked with reviewing the ETIM Model’s English—mostly developed in Europe—and translating it, where necessary, to North American terminology and appropriate grammar. This review and translation process also helps identify products, and/or their features and values, that may be missing or different because they are specific to North America, making it usable by the companies in this region.

As a result of their efforts, ETIM NA announced in August that the translation work conducted over the previous 11 months by its first two Product Expert (PE) Groups, Power Distribution/Automation & Drives and Wiring Devices/Lighting Controls, is now live and available for use by the general public.

Matt Christensen, president of DDS and ETIM North America’s Chairman of the Board, says, “I’m incredibly proud of what we’ve accomplished in such a short amount of time. The work being done to enhance the ETIM standard within these sectors will enable a more seamless flow of product data from these manufacturers to their distribution channel.”

Stay in the know with the latest insights from our team.